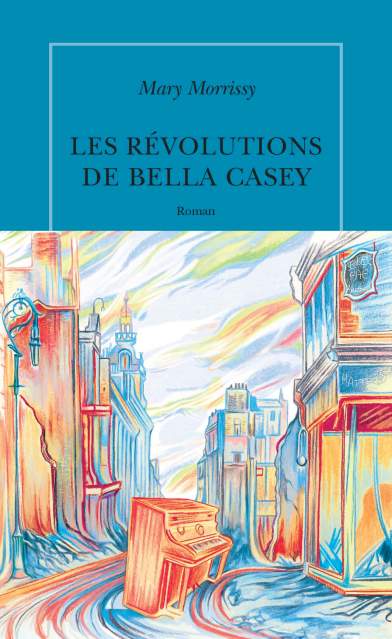 The company was founded in 1944 and its first published title was Antigone by Jean Anouilh; it’s been an  imprint of Gallimard since 1996.  Which means, of course, that it looks lovely. It has the classy simplicity of a trademark  Gallimard edition – a plain cover with clean lines on bond paper – but it comes in a striking Cerulian blue. There’s a gorgeous wraparound flap with a strikingly expressionist illustration (by Aline Zalko) of a piano sitting tilted on the kerb of an imperial-looking street.

This is a scene drawn directly from the novel  – the heroine, Bella Casey, steals a piano she finds on a street in Dublin during the Easter Rising – but with its vivid lines and swirls of hot oranges and vivid reds, the cover manages also to encapsulate the atmosphere of a city in flames.

There were long debates about how to translate the title of the novel.  The Rising in the English title is used ironically, although it is also factual since Bella was caught up in the events of 1916, as were many citizens of Dublin. But the act of stealing the piano – as mentioned above – also resurrects  Bella’s long dormant sense of pride. In French, the novel has become Les Revolutions de Bella Casey which , I think, neatly catches the sense of Bella’s several selves explored in the course of the novel, while also referring to the foment of the turbulent times she lived through..

Alice Deon, daughter of French novelist Michel Deon, is the director of La Table Ronde. She grew up in Ireland and has been a great champion of Irish fiction in translation.  Earlier this month, Michele Forbes’ Ghost Moth appeared in a similar Quai Voltaire edition. Other translated authors in the Table Ronde stable include Norman Mailer, Dacia Maraini and Alice McDermott.