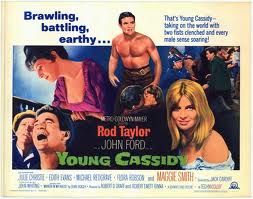 It’s not surprising that the late great Peter O’Toole  played Captain Boyle in one of Ireland’s classic plays, Sean O’Casey’s Juno and the Paycock. The Irish-born actor produced and acted in a 1966 version of the play at the Gaiety Theatre, Dublin, sharing the stage with Siobhan McKenna and Jackie McGowran. But what might be more surprising is that his first wife, Sian Phillips, played O’Casey’s sister, Bella –  subject of my latest novel, The Rising of Bella Casey –  on screen.

The film, based on O’Casey’s autobiographies and titled Young Cassidy,  was a major Hollywood production and shot on location in Dublin.  It was due to be directed by John Ford but Ford  fell ill a couple of weeks into production and was replaced by Jack Cardiff. The film featured a star-studded cast – Michael Redgrave  (as W B Yeats),  Edith Evans (Lady Gregory) Maggie Smith and  Julie Christie.  Flora Robson,  Jackie McGowran  and T P McKenna, played the roles of  O’Casey’s mother and brothers.

Perhaps the most interesting piece of casting was the actor, Rod Taylor, playing Jack Cassidy, a thinly disguised version of O’Casey himself.  The Australian beefcake was an odd choice to play the bookish O’Casey, but the playwright  approved of the casting (Sean Connery and Richard Harris were also considered for the part) though he didn’t live to see the film.

The reception of the film was mixed.    The New York Times found the brogueish Irishness of the production charming, but dismissed John Whiting’s screenplay as “long on character, short on plot,”  echoing  Lady Gregory’s verdict on the first play O’Casey sent to the Abbey Theatre.  Young Cassidy, the review went on,  “may thrill the romantics, but it will leave the realists looking at holes through the screen”. 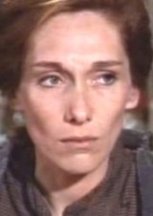 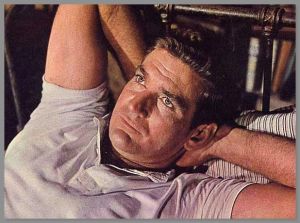