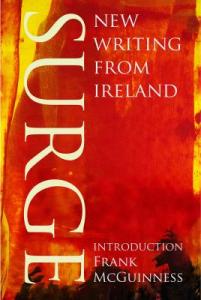 The cover of Surge is fiery looking, as befits an anthology of new writing.  The volume from Brandon Press is a celebration of the old and the new; its publication marks the 40th anniversary year of O’Brien Press and is named after a Dublin literary magazine of the 1930s/40s established by Thomas O’Brien, among others. (Thomas founded O’Brien Press  in 1974.)  The name may be old but the content is all new. It contains work hot off the keyboards of a dozen or so student writers from all over Ireland.

If you want to know what’s happening in creative writing at UCD,Trinity, Queens Belfast, UCC and NUIG, then this volume is a showcase of new names in the fiction firmament.  But there’s more. The anthology represents, more than any dry university curriculum listing could, the ethos of creative writing scholarship – about which there is often skepticism. (Can writing be taught etc etc. . . ) For along with the newbies, there are also fresh stories from established writers who tutor and mentor on these courses such as Frank McGuinness, Eilis Ni Dhuibhne, Mike McCormack  – and yours truly. (For obvious reasons, I’m particularly proud of the students who represent UCC’s inaugural MA in Creative Writing – Madeleine d’Arcy and Bridget Sprouls.)

The idea of the fiction workshop is to mimic the medieval craft guild, in which tyro writers get together with old hands to learn the trade.  What this volume represents is a composite picture of that process.  If you want to see who’s learning from whom, don’t look to the index at the back before reading the stories and maybe you’ll be surprised to find you often can’t tell the master from the apprentice. Rather like looking in on a fiction workshop, where it’s often not clear who’s in charge. And all the better for it.

One thought on “Writing on fire”