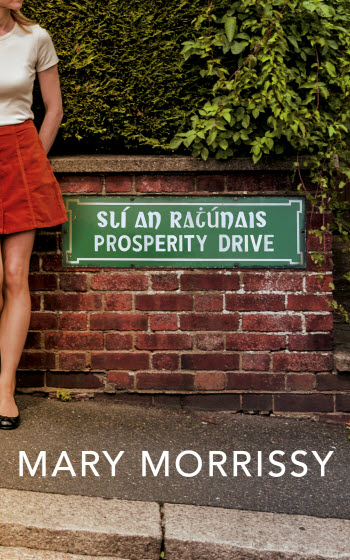 February 25 is publication day for my new collection of linked short stories, Prosperity Drive. Jonathan Cape, my publishers, have described the collection, as an exploded novel, which is an apt description since the content has a distinctly boom-time flavour. (The last boom, that is!)

“All the characters in this mesmerising book begin their journeys on Prosperity Drive. Everything radiates out – often internationally – from this suburban Dublin street, and everything eventually returns to it. It is an Ireland in miniature. Like an exploded novel, Prosperity Drive is laid out in stories, linked by its characters who appear and disappear, bump into each other in chance encounters, and join up again through love, marriage or memory.”

‘Mary Morrissy is a wonderful writer. These stories are entertaining and deft, so skilfully balanced and interwoven that when you begin to pick out the pattern it is a real moment of delight.’

Along with the blurbs the books has garnered, I’m also really delighted with the cover. Originally, the designers were going for a generic image of a suburb, but this is much more arresting – both visually and in its culturally authentic depiction of the book’s landscape. This is unmistakably an Irish suburban street with its bilingual street sign – good to see the Irish language getting equal billing in a UK publication! Also, whether unwitttingly or not, the Irish Tricolour makes a subversive appearance in the cover’s colour scheme – the white of the girl’s tee-shirt, the orange of her skirt, the green of the street sign.  All in all, it’s quite a revolutionary statement. . . See more on: www.penguin.co.uk

2 thoughts on “Exploding the novel”