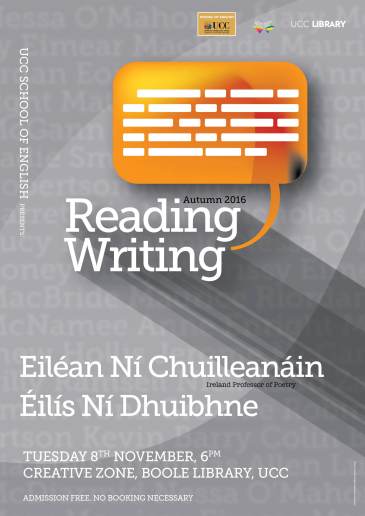 I’m delighted to announce that two of the writers I most admire will read together in the first of University College Cork’s School of English reading series. Between them, they have charted the female – and Irish – experience in five different genres over 40 years.

Ireland Professor of Poetry, Eiléan Ní Chuilleanáin, and the 2015 Irish Pen Award-winning writer, Eilís Ní Dhuibhne will read together at the Creative Zone, Boole Library, on Tuesday, November 8, at 6pm. Admission is free and all are welcome. Come and join us for what is going to be a night of literary riches.

Cork-born Eiléan Ní Chuilleanáin is the author of numerous poetry collections, including Acts and Monuments (1966), winner of the Patrick Kavanagh Award, The Sun-Fish (2010) which was awarded the International Griffin Poetry Award, and The Boys of Blue Hill (2015) which was shortlisted for the Forward Prize.  She is Emerita Professor of English at TCD, the founding editor of the poetry journal Cyphers and this month begins her three-year tenure as Ireland Professor of Poetry.

Eilís Ní Dhuibhne is a bilingual novelist, short story writer and playwright. She is the author of four novels – including the Orange Prize short-listed The Dancers Dancing – six collection of short stories, six novels in Irish and six children’s books. Among her awards are a Bisto Book of the Year for her children’s fiction, the Readers’ Association of Ireland Award and the Stewart Parker Award. She teaches on the MA in Creative Writing at UCD and was awarded the Pen Award for Outstanding Contribution to Irish Literature in 2015.