Why would anyone today want to spend time and money visiting a retrospective of such an oddity, asked Jonathan Jones in The Guardian earlier this year, decrying “Sorolla: Spanish Painter of Light”, an exhibition which has now travelled to the National Gallery Dublin.

Well, me for one, Jonathan!

Joaquin Sorolla y Bastida (1863 – 1923) was in his time a prodigious and prosperous painter whose work was literally drenched in light, as the subtitle of the show suggests.  Luminosity was his by-word, the effects of sun-dazzle on water, the lilac hues of evening on land, and its warm glow playing on skin and fabric. None of which is evident in the painting above, entitled Sad  Inheritance, painted in 1899, a prize-winner at the Universal Exposition in Paris in 1900, where it caused a sensation.

The “sad inheritance” of the title refers to the disabled children featured who are the victims of hereditary syphilis.  It’s a far cry from Sorolla’s usual impressionist landscape of sun-drenched beaches, parasols and picnics.  In this very large canvas (three metres  wide)  a black-robed priest tends to a crowd of naked boys, deathly pallid, blind and physically disabled, as they plunge into the sea for a therapeutic swim.

For 21st century eyes, it’s impossible to look at this image with any degree of innocence.  Everything about it screams abuse. It seems abusive even to look at it, something makes us want to look away – the nakedness and vulnerability of the children, the menacing presence of the grim-faced priest, the way his hand manacles the arm of the struggling boy on crutches.  The ghosts of Magdalene laundries and industrial schools and orphanages intrude and can’t be ignored.

But it raises the perils of retrospective criticism, dismissing a piece of art because the artist was ignorant of its associations for the generations who come after him. As John Berger asked in his seminal work, The Art of Seeing: “To whom does the meaning of the art of the past properly belong?”

Unusually, Sorolla painted this piece in the studio although most of his sea and beach scenes were done en plein air in his home town of Valencia, and later in San Sebastien, and Biarritz.

Although this painting built his international reputation, Sorolla abandoned an overt social realist strain in his work after 1900. But it didn’t disappear; instead, it was backgrounded.  When he depicted the luxuriant, fun-filled world of the Mediterranean seaside, children frolicking in the waves, boys running naked on the shore, white-clad and bonnetted women paddling with toddlers in the shallows, it was often accompanied by the working world of the beach.  Hawkers, fishermen, the drivers of oxen who pulled the fishing boats into shore populate the margins of these idyllic scenes.

The world of work and play sit side by side; we may be, as Sorolla was, intoxicated by the nostalgic light he steeps both his subjects and us in. This glow is pure emotion, imbuing his beach scenes with the sun-blown, sand-dusted, unfettered memories of childhood.  But he never lets us forget the reverse side of this world, propped up by a working class who are darkly omnipresent. (In another painting of this period, Raisin Pickers (1901), Sorolla shows a group of women bent over their work in a gloomy interior, lit only by a wedge of forked light that slices the canvas in two, hinting at the bright, sunlit freedom of outside.) 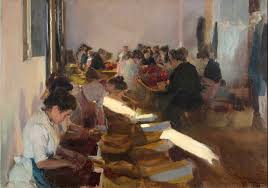 It is true Sorolla’s primary interest was painterly rather than social. Hardly a hanging offence for a visual artist. “Sorolla understood light not as an object but as spectacle, like energy that, in certain circumstances, converts nature and figures into overwhelming instances of vitality,”  writes Jose Maria Faerna Garcia-Bermejo in Sorolla: Modern Masters (Poligrafa).

But Jonathan Jones of The Guardian doesn’t agree. “Today Sorolla is doubly archaic.  Not only do his paintings capture the claustrophobia of traditional Spain before surrealism, anarchism and civil war shook its pieties, but his flamboyant academic style, touched by French innovations in painting yet wedded to much older ideals of figurative art, is blatantly pre-modern.”

Which is like blaming the painter for being born too soon.

Sorolla may well have been a conservative genre painter and may not have matched the sweep and riskiness of the Impressionists, but his treatment of light is both revolutionary and transformative, a gift that can only be appreciated by seeing his luminescent work in  – and on – the flesh.  All of the images here can be seen at the National Gallery where the show continues till November 3.