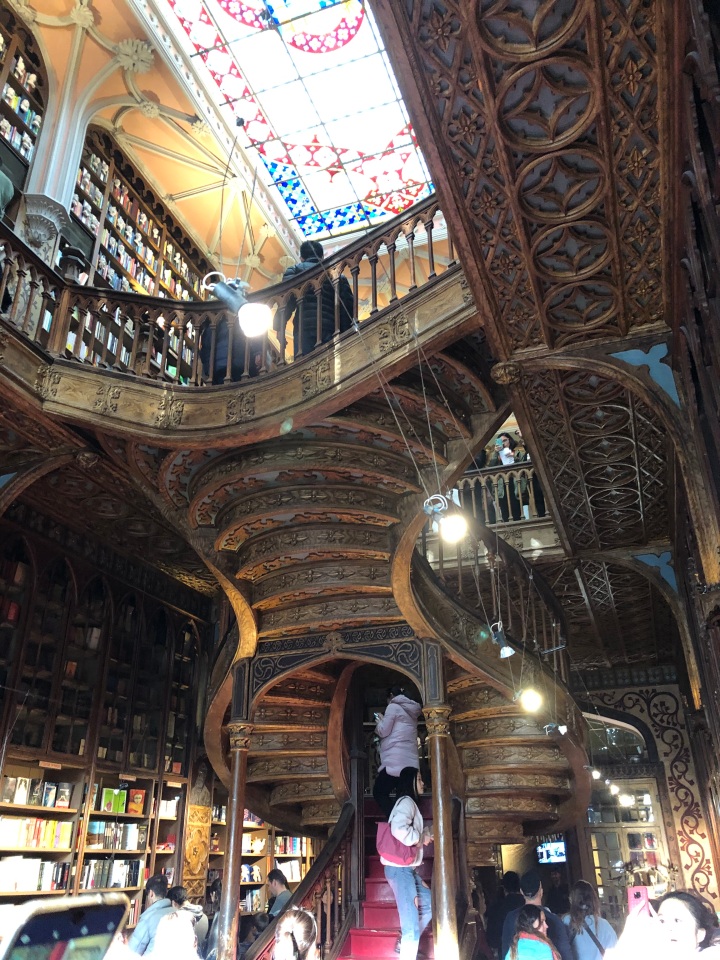 On a recent visit to Porto – luckily, a winter visit; you’ll see why later – we made our way to Livraria Lello, ranked as one of the most beautiful bookshops in the world. And so it is.  Built in 1906, the shop presents an exquisite art deco, Moorish style exterior and an arabesque interior of mock-gothic shelving, a ceiling with high-church stained glass panels and a Gaudi-esque staircase curling its way up through the store’s three floors like the demented manifestation of a Dali nightmare.

Not only was the shop beautiful, it was thronged.

What’s not to like when a bookshop attracts hordes of customers? Particularly when many of them were making a pilgrimage to honour an author? As a native of Dublin, this is a concept I’m familiar with;  after all, Joyce’s imagined characters from Ulysses, and the places they inhabit, get a special day of celebration devoted to them every year on June 16 for Bloomsday.

So what’s the problem? Tourism is what.

Livraria Lello started charging its customer a fee to enter (set against book purchases) in 2015 when it was swamped by so many visitors the shop couldn’t function as a business any longer.  The business of selling books, that is. Now when you arrive on Rua des Carmencitas, you’re steered to a shopfront two doors away to buy a ticket. Then you queue on the street outside to gain entry.  Since it was December, there were only about five people ahead of us so we got in without a wait.  But in summer, the queue stretches for several blocks and people wait for hours on end. 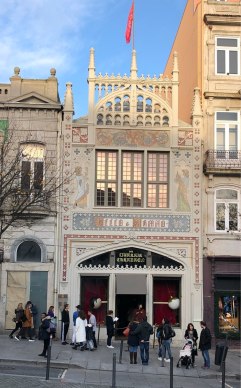 Nevertheless, despite the short queue, the long, high, narrow premises seemed very crowded indeed. There were clusters of stationary people stuck behind displays and frozen in the narrow alleyways arms aloft taking photos with their phones.  That staircase, in particular, was jammed with people taking selfies.  On the display tables in the middle of the shop-floor, there were beautiful gift editions of English language classics for sale, Dickens, Flaubert, Wilde (Livraria Lello is also a book publisher with a long tradition) but no one was looking at them. Likewise the shelves were packed with fabulous books on the arts, the sciences, along with celebrated Portuguese authors like Pessoia and Saramago, three floors high.  But the crowds were not here for any of those either; they were here because of Harry Potter.

The Livraria Lello bookshop is supposedly the inspiration for the Flourish and Blotts bookshop for wizards in the Harry Potter series. J.K. Rowling spent two years in Porto in the early nineties as an English language teacher and she wrote much of Harry Potter and the Philosopher’s Stone while in the city.

Look, I’ve nothing against Harry Potter or the deserved success of J.K. Rowling. (Full disclosure: I’ve never read Harry Potter nor seen any of the films.)  Far from it, I see that Rowling managed to enthuse thousands of  reluctant child readers to tackle the long narrative, in the same way Enid Blyton did for child readers of my generation.  In fact, I’ve often thought that the Potter books are like Blyton’s boarding school series, just with wizards.

I understand completely why the Lello has monetized its premises.  It was, apparently, a failing bookshop, which it isn’t anymore. It’s a thriving example of cultural tourism, the same kind of tourism that fuels Bloomsday. But being a crushed sardine in a beautiful cathedral devoted to literature, to be unable to access, let alone browse through the books, because of the ever-pressing, onward urgent movement of the transitory visitors intent on the next photo op, was utterly dispiriting.

This was no longer a bookshop experience; this was closer to a bad airport trip.

The Potter brigade was not interested in the literary history, the architectural flourishes or the function of the shop. They were moved by the merchandising of a tiny, atomized sliver of J K Rowling’s fictional imagination. (I wondered how many of the Potter fans in the Lello shop that day had ever read the books, but just seen the films.)

“Livraria Lello is still a meeting place for thinkers, artists and writers,” the promotional pamphlet for the bookshop that we got with our E5 entry fee, declared, but it was hard to imagine it that rainy December Thursday.

Instead, the shop represented a depressing microcosm of viral tourism, in which volume distorts the very experience it seeks to promote.

2 thoughts on “Driven potty by tourism”